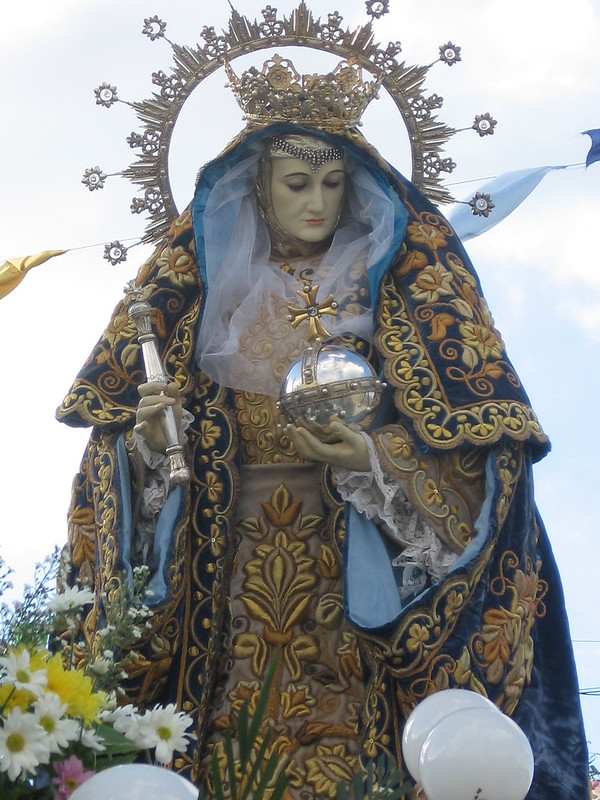 Encyclopedia Britannica Mother’s Day: “A festival derived from the custom of mother worship in ancient Greece. Formal mother worship, with ceremonies to Cybele, or Rhea, the Great Mother of the Gods, were performed on the Ides of March throughout Asia Minor.” Notice the Six Pointed Stars aka Abominations surrounding her Crown. Jeremiah warned against celebrating Mother’s Day  “The children gather wood, and the fathers kindle the fire, and the women knead their dough, to make cakes to the queen of heaven, and to pour out drink offerings unto other gods, that they may provoke me to anger”. Mother’s Day is a celebration of the Queen of Heaven; Astarte, Ishtar, Artemis, Rhea, Cybele etc, all wives of Saturn/Chronus and Mothers of Zeus/Horus/Jupiter; Capitol means “Womb of Zeus”; Jesuits are the Militia of Zeus.  Jesuits call the Arch-basilica of St John (John=Oannes the Chaldean Sea Beast aka “Rising Sun” or Antichrist) the Mother Church of all Churches worldwide; Lateran means “Hidden Frogs” (Frog DNA in Coronavirus Vaccine is self replicating ie permanent) The term “Mother Church” replaced the pagan tradition of honoring mythological goddesses first as the fourth Sunday in Lent (Weeping for Tammuz; 40 means Quarenta or Quarantine), a 40-day fasting period before Easter (Ishtar); the day called Mothering Sunday; “Mothering Cakes” (Jeremiah 7:18) became attached to the Universal (Catholic) aka Mother Church started by the Druid princess Helena and Constantine and ending with their Jesuit offspring and Coronavirus “Crowned Serpent”.. Mother’s Day is the 2nd Sun-day of May; Father’s Day the 3rd Sun-day of June Mother’s Day was officially adopted in the US Capitol “Womb of Zeus” in 1914  “In spite of the popularity of Cybele, . . . and sporadic occasions honoring mothers during the Middle Ages, it was not until 1914 that the proper combination of sentimentality, idealistic promotion and hard business sense impelled the United States Congress to designate the second Sunday in May as Mother’s Day, the worship of “Mother Earth” the wife of Green Man (Saturn) and 4th Horsemen the Pale Green Horse “Death”; Hell for eternity follows. Pagans and Witches hold Rituals as dumbfounded Christians blindly disregard 2700 year old warnings.  Ashtoreth, Ishtar, Easter, Cybele the “Queen of Heaven” is the Abomination of the Sidonians (Phoenician/Cananites); The Yarmulke, Zuchetto, Skull Cap is a replacement for the Temple Veil Jesus tore top to bottom at the Crucifixion; it’s called the Cap of Cybele.  Mother’s Day is not what people think it is; the Queen of Heaven is Noah’s wife aka Earth Mother (Chumolongmo means Earth Mother and refers to Mt Everest the real site of Noah’s Ark), who carried Curse of Cain (Gen 4:11-16) across the Flood via her son Ham, giving birth to the Cursed son Canaan; The Mark of Cain is the same Six Pointed Star, a Hex/Curse used in Witchcraft and virtually every religion.

Cain, the world’s first born of Adam and Eve rebels by killing Abel; builds cities, metals (Swords, Guns, Plutonium), cattle ranches (Beasts of Burden), harps and organs (Churchs) “Noah was perfect in his generations” Gen 6:9 so Ham and his Cainite mother bring the Curse across the Flood by incest, passing it on to the Cursed and Illegitimate Canaan, the 1st born anti-diluvian on Mt Everest “Chumolongmo” (Earth Mother); during the ensuring years they travel “From the East” Gen 11:2 (To the East is the New Bible Lie) to Shinar (Babel) where she is worshipped as a Cult Priestess/Prostitute in the Tower of Babel known as Inanna, Nanna, Ishtar, Cybele (Cap of Cybele being the Yarmulke, Zuchetti, Skull Cap worn under Mitres of Dagan, Fedoras and Turbans worn by Priests today).
Canaan is worshipped the Priest-King Sargon the Great, declared “Legitimate King” and as the son of the Cult Prostitute he is a Priest-King and founder of the Sarmation “Priest-Kings” aka Melchisedekians or Cult of Saturn as Ham means “Black” and Saturn is the Black Star. When he turns 21, the Spring Equinox sunrise on 3/22 moves out of Taurus (Bull) and into Aries. Society 322, Brotherhood of Death; Cult of Melchisedek, Skull & Bones; Cult of Saturn/Serpent, Nazi SS, Mormons, Cult of Fire and Ice etc; on 3/22, the Serpent descends the steps of El Castillo at the Temple of Quezalcoatl (Plumed Serpent) and is start date of the Season of Sacrifice https://imgur.com/r350BT2  (Georgia Guide Stones dedicated on 3/22/80 call for killing all but 500M people living in harmony with the Earth ie Free of God) the Sun (Zodiac aka Knights of the Roundtable) moves out of Taurus (Bull) into Aries (Ram the UNKNOWN GOD of the Areopagus aka Mar’s Hill Acts 17:23 seen as the Roman Mars, Greek Ares and Babylonian Nergal, the same Rooster worshipped at Nowruz “New Light” in Iran, home to Ismailis aka Ishmaelites aka Mede-Persian Ram “Aries”.
Like her mother, an illegitimate daughter of the Cursed Illegitimate Canaan becomes a Cult Prostitute in Haran (Gobleke Tepe, Turkey; Beehive Houses; Mormon Zion=Beehive State; Bee is Chaldean for Word; Honey the Nectar of the Gods; Hexagon shaped Hive serving the Queen of Heaven Noah’s Wife Innanna/Ishtar on Mother’s Day); Sabeans of Haran are the same Chaldeans of Ur; Haran is named after Abram’s uncle and father of Lot the progenitor of Moabites and Ammonites by Incest. Abram is instructed to leave Ur of the Chaldeans (Babylon) and live in Haran.
Edomites, Ammonites and Moabites escape the hand of Antichrist during the Great Tribulation (Dan 11:41). The Six Pointed Star of Ashtoreth “Queen of Heaven” is the Abomination of the Edomites, Ammonites, Moabites and Canaanites. Haran is already home via Canaan’s daughter to the Sabeans “Rising Sun” who live in Beehive Houses and worship the Sun, Moon and Stars; called the “City of the Moon” after “Sin” aka Al-Lah or Allah the Arab Moon God.  Abraham enters Egypt of his own accord and starts a 400 year cycle of his people being strangers in a land that is not theirs: 400 years in Egypt; 400 under Judges in Canaan; 400 under Kings; 400 Inter-testment period and 400 since the Scottish Declaration of Arbroath (Independence from God) and New Atlantis: A Worke Unfinished declaring the US the Phoenix of the New Age ie Blood Sacrifice seen in SARS Coronavirus 2 aka COVID “God’s Door” or Babylon. Note the 1/400 Size and Distance of the Moon and Sun from Earth produces Eclipses which kicked off on Dec 26, 2019 (Day of the Wren or Stephen’s Day); Christopher Wren the “King of the Birds” hitched a ride highest under the wings of an Eagle; note this is the HHS Logo and its Mask the “Operation Warp Speed” Logo which is the Antakarana or “Rainbow Bridge”  a 3-D Swastika. https://imgur.com/GFToaAWStephen was the 1st Christian Martyr meaning “Crown” seen in Coronavirus and the Solar Corona on Dec 26, 2019 on St Stephen’s Day. Sir (Knight in service to the Queen of Heaven aka Noah’s Wife “Earth Mother”) Christopher (Christ=Messiah + Taufr=Red) Wren (King of the Birds) designed 311 Steps in The Monument https://imgur.com/4qAnt4X in London topping out with Coronavirus and the Golden Calf (Marduk/Shamash) matching the date Coronavirus was “Classified” a Pandemic 3/11/2020 which also coincided with Purim “Cast Lots for Marduk”, the day Esther (Ishtar, Ashtoreth=Abomination of the Babylonians and Canaanites aka Noah’s wife, Canaan’s mother “Queen of Heaven”) the Whore is worshipped, one of 2 books without “God” in it; a book that is God in Flesh.
God makes a Covenant with Abraham his sons will not marry Canaanite women Why? because they are Cursed with the Seed of Cain; Ishmael (Ishmael is kicked out at the Zam Zam well in Mecca “Adultery” where Islam is born by Muhammad a Koreish ie Korahite ie Ishmaelite-Edomite Priests; Lev 16:8-10; Num 26:4) and Esau both marry Canaanite women; Isaac and Jacob do not; Esau goes one step further “seeing the daughters of Canaan pleased not Isaac” (Gen 28:8) marrying uncle Ishmael’s Canaanite wife Mahalath and gives birth to Eliphaz who then takes a Canaanite concubine Timna (likely a slave/prostitute of the Edomite-Horite wars; the Edomite HQ Petra is the Horite “Eagle’s Nest”; Hitler used the same name “Eagle’s Nest” now seen in the HHS Logo https://imgur.com/WsVYyMJ ) and gives birth to Amalek, the people at war with God from “Generation to Generation” (Ex 17:16) ie from Cain onward to Canaan (Sargon the Great) to Sargon III aka Antichrist. Now we have the Illegitimate Boule (Aryan or Noble Caste) Cult Prostitute Kamala (Kamala=Lotus; Kama=Sickle; Kamal=Perfection; Kamala an anagram for Amalek/Amalak) Devi (Hindu goddess of sexual gratification ie Cult Prostitute) Gopalan (mother’s maiden name means Brahman “Priest” ie Noble Priest Caste) https://imgur.com/ZqYz8qA  and Jesuit Fauci (Sickle) leading the Pharmakeia “Drug induced Sorcery, Magic” Pharmakos “Ritual Sacrifice” all controlled behind the scenes by the Black Nobility clan Orsini (Beyond reproach https://blacknobilityvaticancosanostra.blogspot.com/2019/08/orsini-rosenberg-alchemical-mafia.html) the owners with BlackRock Investments who own all of the Pharmaceutical Corps, Media (Medean Magi), Internet, TV, Billboards (Clear Channel), Mafia, Hollywood (Parasite and Nomadland last 2 Oscar’s “God’s Spear” or “Spear of Destiny”) Holy Wood being the Tree Jesus was Nailed to.