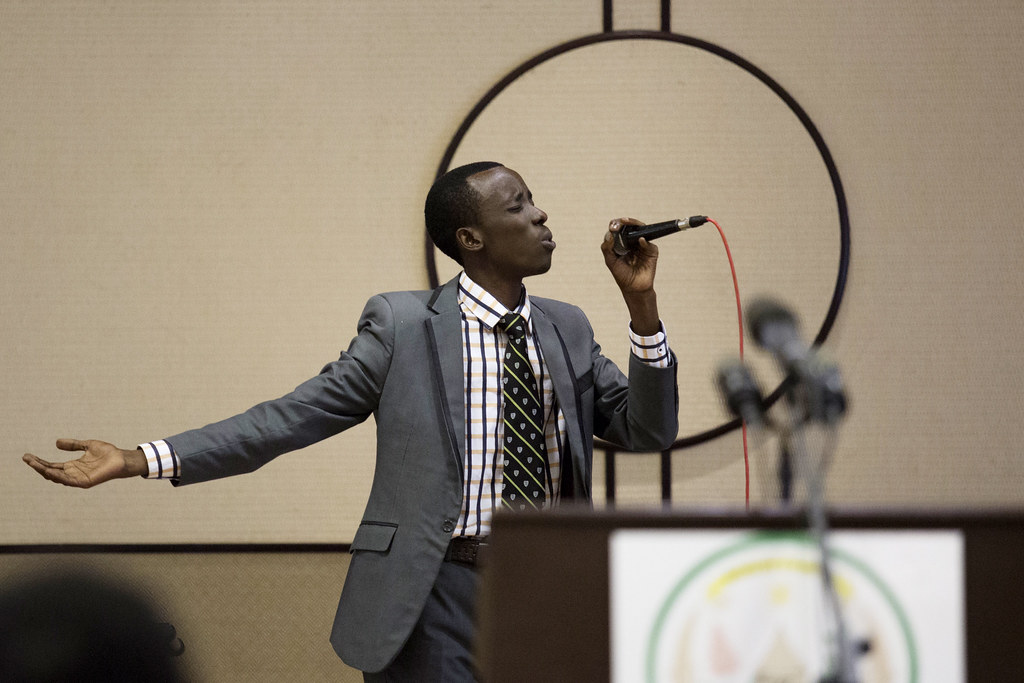 The Family is fashioned after the Vikings (Abraham Vereide was described by his peers as a “Modern Day Viking”), Crusaders, Normans, Pirates, Bankers etc. The Family trains Kleptocratic Despots (named after Desponsynoi aka relatives of Joseph, Mary or Jesus) to believe they have a Divine Right to control the world’s assets.

DRC (Democratic Republic of Congo) Billionaire Dictator, Kleptocrat, Mass Murderer who ordered the slaughter of 350,000 Hutu speaking at The Family National Prayer Breakfast. People of Praise is a Jesuit Covenant based secret society formed around the Spiritual exercises of Allumbrado-Marrano Ignatius Loyola. Male “Head” and Female “Handmaids” lead Protestant, Lutheran and Catholics in seeking Charismatic Gifts such as Speaking in Tongues 1 Cor 14:22 (“Wherefore tongues are for a sign, not to them that believe, but to them that believe not: but prophesying serveth not for them that believe not, but for them which believe”; Oops!), Prophecy (Lk 16:16 “Law and prophets were until John”; Oops!), Prophesy (Understanding Scripture is a gift of God which comes after Charity “Love of God” 1 Cor 14KJV) and Evolution (Jesuit Lie in opposition to Scripture also believed by Jesuit Pope Francis). Notre Dame Law Professor and Federal Judge Amy Coney Barrett is a “Handmaid” in People of Praise, the “Head” is Notre Dame (Our Lady) Physics and Elect Eng Professor Craig Lent, an appropriate name, Lent=40 Days “Weeping for Tammuz” (Eze 8), the false god called Zeus (Jesuits are the Militia of Zeus), Jupiter, Horus. Our Lady has nothing to do with Mary; Cybele aka Easter/Ishtar is Our Lady.

“The men who understood the true meaning of the New Covenant best were Adolph Hitler, Joseph Stalin, Pol Pot and Mao Tse Tung” Doug Coe leader of “The Family” whose intiates include Mike Pence, Dr Ben Carson, Dan Coats, Jeff Sessions, Betsy DeVoss, Billy, Franklin Graham and “Cells” of Congressmen, Senators, Judges, Businessmen.
Jesus said “Love God” “Love our Neighbor”
The Family aka The Fellowship is an outgrowth of Calvin’s Protestant Religion, specifically the Restoration Movement. The Family was started by Methodist Minister Abraham Vereide and was later run by Doug Coe with the purpose of setting up “Cells”, small groups of power brokers in the US and abroad. Writing on the Wall points the time after the 10th Jubilee following Martin Luther’s 95 Theses and 5th Lateran Council. https://theresnothingnew.com/articles/writing-on-the-wall/ You may recall Jesuit Pope Francis “Focus on the Family” theme in 2015; the question is Who is The Family? Qedarites.
Qedarites are Ishmaelites-Edomites and their Phoenician/Canaanite wives. Qedar/Kedar and Cedar are synonymous; The Family aka The Fellowship houses, trains foreign diplomats at a mansion called The Cedars; Cedar from Mt Lebanon used by Phoenicians to build Solomon’s Temple; the 3rd Temple will house Satan’s Seat, the Abomination of Desolation and the Antichrist whom Micah refers to as “The Assyrian” “And this man shall be the peace, when the Assyrian shall come into our land: Ezekiel refers to the Assyrian as a Cedar in Lebanon ie one pretending to be of God’s people but is not. “Behold, the Assyrian was a cedar in Lebanon with fair branches…” Eze 31:3 The Assyrian Eagle is Nisroch aka Saturn, symbolized also by the Six Pointed Star on the Flag of Israel aka Seal of Solomon brought Israel originally by the Phoenicians who married King Solomon. The Family took root under an American Eagle.
There are hundreds of “Cells” in “The Family” in foreign nations; in the US Government, members of “The Family” include US Senators Strom Thurmond, Mark Pryor, Mark Hatfield, John Ensign, Tom Coburn, Sam Brownback, Charles Grassley, Jim DeMint, Lindsey Graham, Conrad Burns, James Inhofe, John Thune, Pete Domenici, Bill Nelson, Don Nickles, Mike Enzi, Rick Santorum, John Kerry, Al Gore (Gore is on record stating Doug Coe “is my personal hero.”), Hillary Clinton. 33 degree Luciferian Freemason, Watergate felon and head of “Prison Fellowship” (Privatizing US prison system) Charles W. Colson, Chief Justice William Rehnquist, Ronald Reagan’s Attorney General Ed Meese, Ronald Reagan, 33 degree Mason George H.W. “Magog” Bush, Bush Sr’s Secretary of State James Baker III (Carlyle Group Lawyer), 33 degree Mason Bill Clinton, Karl Rove, George W. Bush’s Attorney General John Ashcroft and Atty Gen Alberto Gonzales, George W. “Gog” Bush, NATO Supreme Allied Commander, Obama National Security Advisor Marine Corps General James Jones.

“Most of my friends are bad people”-Doug Coe

Seattle preacher Abraham Vereide experiences a revelation: Christianity is about helping the strong, not the weak. He sets out to organize an anti-New Deal coalition of Christian businessmen.

Success! Despite accusations of fascist sympathies, one of Vereide’s men, Arthur B. Langlie, is elected governor of Washington.

State Department sends Vereide on a mission to scour Allied prisons for Nazi war criminals willing to switch allegiance from the Führer to Our Father.

Eisenhower reluctantly agrees to come to first National Prayer Breakfast, envisioned by Vereide as annual ritual to consecrate the nation’s political leadership for Jesus. Attended by every president since, the breakfast will become the movement’s most potent recruiting tool, with foreign leaders invited for face time with US politicians and businessmen. Oil and defense especially well represented.

Senator Frank Carlson (R-Kan.), a leader of the movement Vereide has incorporated under the umbrella of International Christian Leadership, takes a delegation of US businessmen to Haiti to meet a promising young leader. With their support, he’ll become dictator “Papa Doc” Duvalier.

CIA-supported General Suharto takes power in Indonesia through what the spy agency will later admit is “one of the worst mass murders in the 20th century.” Vereide and his understudy, Douglas Coe, consider it a “spiritual revolution” and organize junkets for congressmen and oilmen who will become Suharto’s champions in Washington.

Vereide “promoted” to heaven. Coe assumes leadership and takes Vereide’s publicity-shy approach to new extremes, “submerging” the organization and instructing congressmen not to speak of what he begins calling “the Family.”

Coe introduces Watergate hatchet man Chuck Colson to what Colson will describe as a “veritable underground of Christ’s men all through government”—men who’ll vouch for Colson’s early release from prison a year later and back him as he begins building his own conservative Christian ministry.

The Family embraces Somali dictator Siad Barre—a self-described “Koranic Marxist” who is looking for a new patron after being dumped by the Soviets—and will organize prayer meetings for him with a defense contractor, two successive chairmen of the Joint Chiefs of Staff, and Sen. Chuck Grassley (R-Iowa).

In Uganda, Yoweri Museveni takes power at the head of a guerrilla army following a massive civil war. The Family pledges support for the new government, calling for prayer and foreign aid to ensure that “the most Christian country in Africa not take the wrong ideological direction.”

Thanks to the 1994 GOP landslide, the Family’s townhouse on C Street fills up with a bumper crop of fresh-faced conservatives; house becomes the place to be for policy discussions and game-night parties.

I publish the first inside report on Coe’s movement, in Harper‘s, based on a month spent living with the organization. The investigation will grow into two books, The Family (2008) and C Street (2010).

C Streeter John Ensign, fourth-ranking Republican in the Senate and a presidential hopeful, confesses to an affair with the wife of his best friend, senior aide, and fellow Family member. It soon emerges that C Street helped him cover it up, even allegedly orchestrating payments to the cuckolded friend’s family.

Ugandan legislator David Bahati, a Family leader in the Ugandan Parliament, introduces Anti-Homosexuality Bill (PDF), which he describes as the direct fruit of his involvement in the Family. It dramatically expands punishment for homosexuality (already illegal in Uganda) and calls for the death penalty for “serial offenders” and imprisonment for failing to report gays to authorities.

National Prayer Breakfast faces protests from gay-rights activists and Christians outraged by the Uganda bill. Family has already persuaded Bahati, a prayer breakfast regular, not to attend. Obama denounces the Ugandan bill from the podium.