Cathedral of St John the Divine 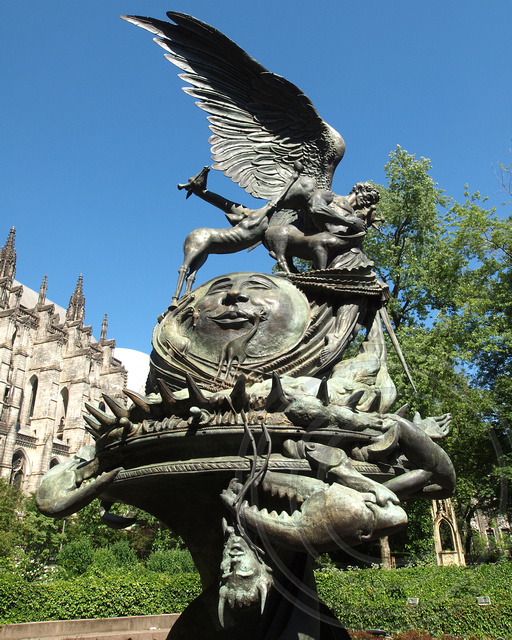 The original article is here https://web.archive.org/web/20180630143843/http://www.theresnothingnew.org/index/Cathedral_of_St_John_the_Divine3
Cathedral of St John Divine claims to be the largest Gothic Cathedral in the world; it was featured on the cover of Masonic World Magazine Mar 1925. Baphomet (Baph=Wisdom + Metis Understanding) the union of Wisdom and Understanding seen in the Cathedral as home to the Temple of Understanding. St John is a mystical combination of John the Baptist and John the Evangelist seen in the Chaldean Oannes aka John. The Temple serves as the center of New World Religion in combination with the United Nations. Madeleine L’Engle “A Wrinkle in Time” co-founded the Temple and taught Tantric Yoga, Astral Projection, Tarot, serving as the Cathedral librarian. You can visually see the Wrinkles emanating from a Smoking Hole next to the 17 Digit (17=Admirable Sacrament https://www.ridingthebeast.com/numbers/nu17.php Midnight Countdown Clock in NYC Union Square Park. Trump Tower at Broadway & Columbus Circle; from 57th St (57 the number of years it takes for the Moon to return to the same place and time; 57 is seen in 5G Global Broadband which destroys plant and animal life worldwide, 24/7 https://principia-scientific.org/petition-26000-scientists-oppose-5g-roll-out/) it takes 7 (5X7=35; 5; Roman V=Hebrew 6=Shin=Nail; the 3 Nails used to Crucify Jesus and 666 Mark of the Beast ring a Baal?) Left hand Forks on Broadway to get to Union Square Park; Jesus, the “Narrow Path” separates Lambs on His right from Goats on His left; the latter will hear “Depart from me I never knew you”.
New Ager Jean Houston wrote “The Temple’s purpose is to facilitate the one world religion, through the promoting both the acceptance and the embrace of all religions, beliefs and rituals. The Temple of Understanding’s Meditation Room was to be known as the “Hall of Illumination”‘ where the Illuminati, Masters of Wisdom, Our Leaders of the Temple of Understanding will train the public in the new humanistic cult, to create a new type of mystic”
33 deg Freemason, Bohemian Grove Earth Worshipper Al Gore attends the Cathedral frequently saying “God is not separate from the Earth“. The Inconvenient Truth is God is the Creator of Heaven and Earth; His Name is Jesus aka Alpha and Omega, I AM, Melchisedek, Shiloh (Master of the House), JEHOVAH (Ex 6:3), JAH (Ps 68:4KJV), JESUS (Mat 1:25KJV), God in Flesh, the Word made Flesh and the Holy Ghost, the sole source of Salvation in the New Covenant. God said “Go forth and multiply”, not “Go forth spewing Carbon until your waste destroys the Earth”

New York City, the NY Stock Exchange and Washington DC destroyed; the plan is to claim the United States is Rev 18 “Babylon has fallen”; Don’t fall for the nonsense. America will be the Phoenix of the New Age out of the Holocaust ashes, the New Atlantis will rise; Jesus will return to destroy all of it.

Cathedra means “Teaching Seat”. The Jesuit Cathedra is at St John Lateran Arch-basilica in Rome behind the Lateran Obelisk, the tallest Baal’s Shaft in the world. Lateran means “Hidden Frogs”, the 3 unclean spirits of Satan, Antichrist and False Prophet; the 5th Lateran Council proclaimed “Indestructibility of the Soul as Catholic (Universal) Dogma in 1517. The “Deadly Wound” of the Beast created on Halloween 1517 by Rosicrucian Monk Martin Luther was healed on Halloween 2017 by Jesuit (Militia of Zeus) Pope Francis I. St John Lateran houses Sede-vacante the Vacant Seat of the Bishop of Rome will be filled by the False Prophet aka Beast rising from the Earth, depicted by the giant statue “The Awakening” in Washington National Harbor. Recall St George slays the Drago in Cancer depicted by the Peace Fountain; at the United Nations, St George slays the Dragon, depicted as a US Nuclear ICBM. The UN will assume control of America’s War Machine, currently headed by Sephardic Marrano fake Catholic Antonio Guterres.

Idols at St John Divine
Serpent in the Garden of Eden with Eve The Serpent aka Devil, Satan, Dragon (Rev 12:9) in the Tree of Knowledge of Good and Evil enticed Eve to Sin first; Adam then followed suit in Gen 3:22 hence the Brotherhood of Death aka Skull & Bones Society is Society 322, the logo used in Piracy, the most prolific being International Bankers from Wall St.
Phoenix The New World Order will rise as a Phoenix (Pa=House + Enoch); recall there are 2 Enochs, one the son of Cain, the other a son of Seth taken to Heaven on a Chariot of Fire before death; the latter will be one of God’s final “2 Witnesses” with Elijah. Elijah is a combination of El and Jah. El=Saturn; Elohim are “Followers of Saturn”; the Wide Gate is Bab=Gate + El or Babylon where Osiris/On “Heliopolis” (City of the Sun) seen in “Babylon”. America is planned to be the Scapegoat for Rev 18 “Babylon”; the New World Order rising as the Phoenix from its ashes under the presidency of Donald “King of the World” John “Jah has favored” Trump (Trumpet/Trump of El), the 44th person selected US President. 44 is the number associated with Saturn and the 9th Circle of Hell protrayed by Dante Alighieri; the worst Sin being “Treachery against God”. Liber 44: Mass of the Phoenix is the Thelema (Will) book channeled from the Demon Aiwass to Aleister “Great Beast” Crowley “Wood of the Crows”. Crow is the bird Noah released from the safety of the Ark representing “Freedom from God”. Pretty coincidental Pope Benedict and Pope Francis released Peace Doves which were attacked by Crows eh?
Peace Fountain and tells the story of DNA rising from the Sea; Life did not originate in the Sea, it was created by God. Merovingians claim the DNA “Holy Grail” of the Beast rising from the Sea “Beastea Neptunis”, “Merovee” seen in the Merovingian Kings who claimed to represent the “Holy Grail and the Light Bearer “Lucifer”.
The Crab is Cancer (June 21-July 22) “Feast Day of St John” is June 24; opposite Dec 24. Saturn’s 28 year elliptical orbit is around 2 mathematical points called “Black Suns” which align with the Earth and Visible Sun on June 24 and Dec 24. Gnostic Johnitters hid worship of Satan in the ambiguous figure “John” (Oannes); they teach Archangel Michael is Jesus who vanquishes Satan; Wrong! Jesus did that already; this can be seen in the “Peace Fountain” with Michael killing Satan atop the union of the Sun and Moon, a symbol of the “Divine Union” or “Sacred marriage”, an Satanic Initiation and open rejection of Jesus Christ in the Astroligical House of Cancer, atop a DNA Helix represending the Toes of Clay and Iron in the Babylonian Abominantion of Desolation. Followers of JESUS are Holy meaning Separate; they don’t mix with anyone else.
Freedom Plaque denotes Freedom from God in the New Age, a Saturnian Golden Age return to the Garden of Eden minus Jesus Christ (Tree of Life) and His followers ie the line of Seth, Shem, Isaac, Jacob and Jesus Christ.
Lotus Flower Antichrist (Alternative Messiah) of the New Age is born from a Lotus Flower in one of the entrance pillars. Lotus is the Flower of Buddha (Sidhartha Guatama refers to Gotama “World Pillar”); on a meeting with Pope Francis I, Donald Trump, Melania, Ivanka and Jared Kushner wore black funeral attire next to the Pope Francis in White; Trump’s gift to the Pontiff was a Lotus Flower. The Age of Aquarius is the New Age born as a Phoenix from the ashes of its own Holocaust.

The 7 step Spiral is a burial mound “Tor”, most famously seen at Glastonbury Tor aka Avalon “Place of Apples” where Aplu=Apollo=Apollyon=Abaddan of Rev 9:11, the First Woe! 5th Trumpet when Satan is cast to Earth. Glastonbury is the burial place of King Arthur “Once and Future King” and home to the Aquarian Cross. Arthur means “Branch” as well as “Bear Guard” guiding Ursa Major, the Big Dipper “Water Pourer” of the Aquarian Age ruled by Saturn around Draco the Celestial Dragon. Saturn’s son Jupiter/Zeus/Marduk was born Sept 23, 2017 from Virgo, impregnated 9 months earlier in the Egyptian month of Aythr by Comet C/2017 “Borisov” (God like) streaking from the Loins of Leo to the Womb of Virgo where Jupiter spent 9 months forming the X in Retrograde before being delivered (Rev 12:1) on vivid display.
The first Chaldean Solar Priest were called “Konn Tors”. Atop Glastonbury Tor is the Aquarian Cross representing the Labrys, a Cretan Axe blade used in the Fasces Symbol; the Labrys is also the Golden Mean aka Ratio of Life, representing Phi (1.618) and the Fibonacci Sequence.
America destroyed NYC and Washington DC are destroyed in pillar carvings. Wall St is named after the Wall of Jericho God destroyed with the Shofar Trumpet Joshua circled the walls with. “Foundation Sacrifices” began with Heil sacrificing his sons to rebuild the Wall. The Wall St Bull is the Egyptian Apis Bull and Golden Calf of Beth-El and Dan, a symbol of Zeus/Lucifer seen in the Hanukkah Menorah center candle Shamash “Calf of the Sun”.
Gnostics plan to destroy America as the Phoenix of the Aquarian Age; a Scapegoat for “Babylon” in Rev 18. Rev 18 describes the “What city is like unto this great city!…that great city, wherein were made rich all thad had ships in the sea by reason of her costliness! for in one hour is she made desolate.” Rev 18:18-19 “Thus with violence shall that great city Babylon be throen down, and shall be found no more at all” Rev 18:21 The Cult of Saturn plan to present New York City to the world as the “Great City Babylon”
The world is $217T in Debt created by Wall St. $22T Cash; $115 Trillion in unfunded liabilities created by Wall St. $700+ Trillion in Derivatives created out of thin air by Wall St.
Amurru means “Serpent”; Amurru aka Palmyra Syria was the center of the Molech Cult where sacrifices were brought to the foot of Molech, usually in the form of a Bull identical to the Wall St Bull. Amurru is the Edomite Serpent and Shepherd God; Amar the Canaanite God of the West; Amaruccu the name of the Americas well before and after Columbus arrived. America was set up as the Scapegoat for “Economic Babylon” in Rev 18 in order for the New World Order to Rise as a Phoenix (Pa=House or Enoch) from our ashes. 2017-18 is the Satanic Jubilee Year when debts are wiped clean; the US is in Debt $22 Trillion + $115Trillion (Unfunded Liabilities) + $1 Quadrillion in toxic Derivative Investments. The US is a worldwide Financial Black Hole destroyed by the Black Horse of Revelation.
Rooster Cock in the entrance pillar is the UNKNOWN GOD of the Areopagus “Mars’ Hill” in Athens heralding the Rising Sun “Lucifer” and represents betrayal of Jesus. The Rooster is the Babylonian god of War Nergal, Persian god of Nowruz “Sanjak”, Greek “Ares” and Roman “Mars”. Paul warned Athens not to ignorantly worship the UNKNOWN GOD in Acts 17:22-24.

St John Divine Cathedral holds annual Blessings of Animals, St Lucia “Bride of Light” Rituals, Solstice Rituals, Blessing of Bicycles, and Halloween “Procession of Ghouls”; Ghouls are “Walking Dead”; Mormo is “King of the Ghouls”, one of 99 names of Satan. Inside is a giant Upside Down Cross, a Memorial to 9/11/2001 and a giant 300,000 Yr old Crystal (Earth is 6000 Yrs old). Displays change, but Jesus hanging upside down in a nest of antlers and a clock running backwards adorned the Pulpit. “Howbeit the Most High dwelleth not in Temples made with hands” Act 7:43